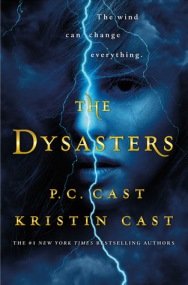 Where to buy: Amazon| Barnes & Noble

Synopsis:
Foster Stewart knows she’s different. Her life has never been “normal.” Talking to plants and controlling cloud formations aren’t things most seventeen year olds are into. Tate “Nighthawk” Taylor is perfect. Star quarterback and all around dreamy boy next door he never thought about his “extra” abilities. What quarterback wouldn’t want night vision? That’s not weird, right? It’s cool!

But on the night of their first meeting a deadly tornado brings them together and awakens their true abilities – the power to control the element air. Unbeknown to Tate and Foster, they are the first in a group of teens that were genetically manipulated before birth to bond with the elements. Which truly sucks for Foster, as she has to face the fact that Dr. Rick Stewart, her beloved scientist father, betrayed her and now wants to use her and the others for his own nefarious world domination plot.

Foster and Tate must stop Dr. Stewart and his minions before he destroys their lives and the world.

Tate and Foster are a power duo and I am all here for their relationship. We meet Tate and Foster at a football game when danger strikes and tornados rip through the area where they are at. We know that Foster has a mind trick going on but we learn more about her ability to control wind during the interaction with Tate. Can we say this was an enemies to lovers relationship – I wouldn’t say so. I think it was more of “we both control air and are bonded together weirdly through that because of a mad scientist” kind of relationship that made their interactions more interesting. I loved that Foster was assertive and strong. I also loved that both Foster and Tate complimented each other’s traits.

The other set of frequent characters mentioned in the story are the Core Four which consists of Eve, and her four bothers. They all control a different element and frankly those elements are destroying them. They are the older creations of Dr. Stewart’s genetic modifying. I will have to say that I did not enjoy them. However, who really enjoys a villain?  They were all in their thirties but their actions and emotions confused me into thinking they were much younger. They didn’t feel developed enough to feel like there was a reason for them to be villains. Yes, they want to find a way to be free of the burden of their ‘father’ and his greedy obsession with power, but should they really believe his word?

I enjoyed that there was a X-Men and Avatar: Last Airbender vibe to their magic. They control and can manifest a power – that should be great, right? Well, there were times where it didn’t completely make sense. For example, how did Dr.Stewart managed to mutate their genetics,. Why does it only truly manifest at age eighteen? Those were some of the questions I had throughout the story that I hope will be answered n the next book. I will say it was unique. You don’t get a lot of stories where teens can control the elements so I’ll give them that.

In terms of the world,  I think they did well with keeping the natural storms to areas that they occur in.

This could be a promising story and something I can really get into. There are a couple of things that I would personally have wanted to see worded differently or told differently but it was bad enough to completely give up on it. There were some plots [i.e. when events involving elemental manifestation occurs] where the timelines did not always add up. I wasn’t sure whether this was something intentional or just an oversight.  As a whole, the authors did well is making an interesting story line that gave some lead way for imagination.

It was an enjoyable read. The humor added helped deal with the more dramatic parts of the storyline. I do want to understand more of the backstory of how the genetic modification caused them to gain this power. It was a quick read and pleasant new story from two authors I’ve been reading for a long time.