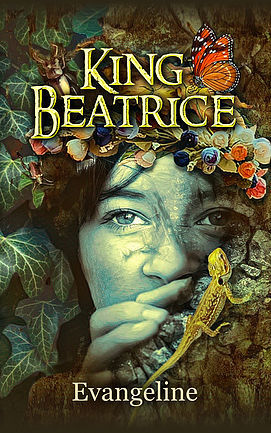 KING BEATRICE is a coming-to-age novella that’s after your heart!

Alex is a young boy interested in his experiments, his dog, family, and little else. He lives a life of seclusion until the day his dog leads him on a wild goose chase through the forest and he comes across Beatrice, a crazy girl with leaves in her hair and the fierce belief that she is a king.

After many attempts of trying to avoid Beatrice, Alex realizes he’s stuck with her. As the years continue and a true friendship grows, he finds that perhaps she isn’t so bad, even if she constantly bests him in their duels. But life isn’t so simple, as the real world—a world of bullies and death and temptation—invades their make-believe, will it be too much for Beatrice? Will Alex make it to her in time?

This was a captivating coming of age story that gracefully explored so many real things that happen. It also showed how a friendship can stand the test of time and the test of two kids growing up. The story talks about grief, loss and those two change the way a person is but also changes how others see them. At times, this beautiful story pulled at my heartstrings when I least expected it.

We meet Alex and Beatrice as young pre-teens. Alex, a natural introvert, would rather stay at home creating experiments than be outside. Beatrice, a lively young girl, spends her time in the woods as a king of her own kingdom. The two meet one day when Alex’s dog leads him to the woods. There, a slow friendship evolves after Alex realizes he’s stuck with Beatrice. Beatrice, the new kid in the  school, instantly clings to Alex because he is the only person she knows. She is a tough cookie who cares deeply and you can see that whenever she defended Alex. Beatrice also lived in her imagination more than she did reality. This was mostly her way of coping with her mother’s loss. The kingdom she created was one of wonder and something she desperately wanted Alex to see as a kid. Once, their friendship grew Alex went along with the pretend play and was okay with occasionally losing to Beatrice in their duels. However, one day at school a fight broke out and while Beatrice was defending Alex, she caught him.  Alex denounced their relationship and all seemed completely done.

Fast forward to five years and Alex is seventeen and in high school. When walking his high school halls he spots a girl whose beauty stopped him right in his tracks. There was a familiarity to her that Alex soon discovered belonged to an old friend of his. Beatrice has turned and moved back to her home with her father. The two pick up a relationship but it doesn’t start off the same. Beatrice has other less savory friends that Alex do not agree with but will tolerate in order to see Beatrice smile. During that year so many occurrences happen that bring the two together closer than ever. Beatrice seeks the help she needs and Alex supports her journey to feeling happy again for the short time before he goes off to college. What I loved most about their friendship was that it wasn’t a cookie cut perfect friendship. They went through their ups and downs together and separately but it didn’t stop their friendship from reblosoming.

The one topic that the author did so well discussing was how grief and loss can have a large role in a person’s happiness. We see this in Beatrice. As a young 12 year old, she uses her imagination to escape form the pain she feels of not having her mom around. When we meet her again as a 17 year old, she has resorted to other devices to escape because her imagination alone can’t do it. Alex begins to pick up on this and is almost too late to save his friend. What happens to Beatrice is a wake up call for all but also preparing for Alex to deal with grief and loss as well. This story has everything you want when reading an emotional coming of age story. It has heartache, loss, but it also contains hope and growth and discovery. It allows the reader to relate in some way and/or understand both Alex and Beatrice and how their opposing personalities made for a dysfunctional yet loving and powerful friendship.