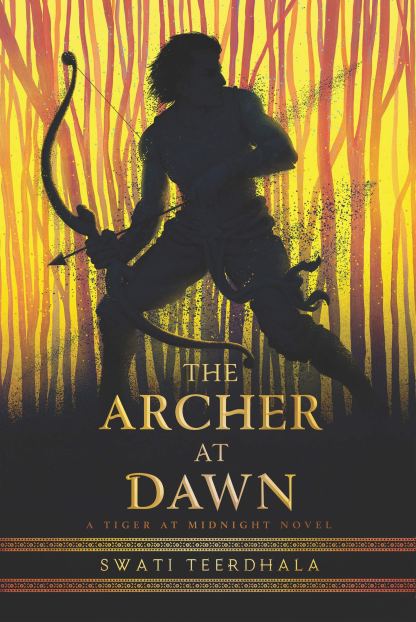 The Sun Mela is many things: a call for peace, a cause for celebration, and, above all, a deadly competition. For Kunal and Esha, finally working together as rebel spies, it provides the perfect guise to infiltrate King Vardaan’s vicious court.

Kunal will return to his role as dedicated Senap soldier, at the Sun Mela to provide extra security for the palace during the peace summit for the divided nations of Jansa and Dharka. Meanwhile, Esha will use her new role as adviser to Prince Harun to keep a pulse on shifting political parties and seek out allies for their rebel cause. A radical plan is underfoot to rescue Jansa’s long-lost Princess Reha—the key to the stolen throne.

But amid the Mela games and glittering festivities, much more dangerous forces liein wait. With the rebel Blades’ entry into Vardaan’s court, a match has been lit, and long-held secrets will force Kunal and Esha to reconsider their loyalties—to their country and to each other. Getting into the palace was the easy task; coming out together will be a battle for their lives.

This thrilling sequel leaves off where The Tiger at Midnight left us, so if you have read The Tiger at Midnight, stop here, grab a copy and then read The Archer at Dawn. Trust me, you won’t regret it! Swati continued to grace us with backdrop full of rich scenery and culture, strong plot points, great action scenes, and a romance we were asking for. It is a great YA fantasy that managed to balance so many parts of a novel while still continuing to surprise and amaze us.

The Archer at Dawn follows the continuation of Kunal’s and Esha’s story. Kunal, back as a solider and Esha, advisor to Prince Huran. Both work together in figuring out what is basically going on and learn such palace shifting secrets that question their loyalties. The story follows a dual POV and I honestly love storytelling where you hear multiple pints of view.  I was glad to see the author continue that route because Both Kunal and Esha are so different n how they speak and think and it adds on the excitement you’ll get when reading it.

I also enjoyed the romance in this story. A hate-to-love trope I was kind of routing for was confirmed in this sequel. Now, Swati knew what she was doing with this slow burn romance. During The Tiger at Midnight, I kept turning the pages wondering, wow “Kunal and Esha is a couple I would ship,” hoping after each page turned I would have that confirmation. When it showed more in The Archer at Dawn, I was here for it. Both Kunal and Esha’s personalities compliment each other in many ways. Because their personalities are different and because the relationship felt more developed along the way, I was happy to see when it finally came to fruition.

Throughout The Archer at Dawn, you are given such warrior-esque battles, terror fueled competitions and questions of one’s moral values. It wasn’t the action I was expecting, but I welcomed it because so much of the action made sense with the overall story-line. Add the beautiful story backdrop and the thrilling page turning moments the authors add, this sequel was well baked and ready to serve. I Enjoyed reading a novel about two divided nations and tow people from those nations who worked together against a sinister plotter[s]. It has a budding romance, amazing dialogue and great heavy inspiration of Indian and Hindu mythology. Speaking of inspiration, the mythology and inspiration of the book was so fascinating, I have been looking up Hindu mythology and basking in how awesome it is.

The Archer at Dawn is a sequel that you do not want to miss reading. An underrated series worth every page turned.

Swati Teerdhala is the author of The Tiger at Midnight series, which has appeared on both Barnes and Noble and Book Riot’s Most Anticipated Novels lists.

After graduating from the University of Virginia with a BS in finance and BA in history, she tumbled into the marketing side of the technology industry. She’s passionate about many things, including how the right ratio of curd-to-crust in a lemon tart. She currently lives in New York City.